Sale of Iberian cebo hams. Certified hams from Guijuelo, Andalusia and Segovia. With a breed of 50% and 100% Iberian. We offer them in whole pieces, boneless, tacos and sliced ​​both by knife and by machine. 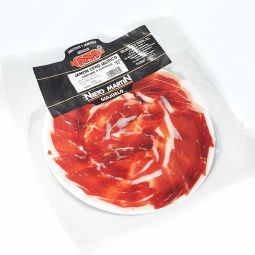 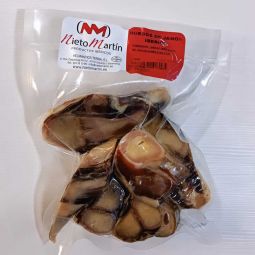 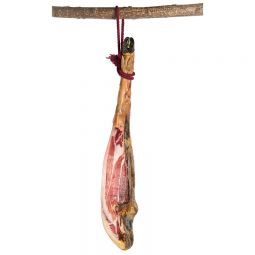 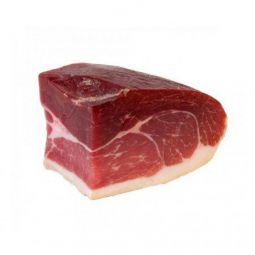 It is raised and processed in the Iberian Peninsula and comes from the hind legs of pigs with at least 50% Iberian blood.
The green label used to identify it serves as the primary means of differentiation. This label, which is situated above the hoof, near the elbow, ensures a number of qualities that we will develop in the lines that follow:

Firstly, Cebo de Campo Iberian ham is obtained from pigs that have lived in captivity, but that the last stage of their life has been lived in freedom.

The breed of these animals must be at least 50% Iberian, but they can also be a 100%, as is the case with our Coloryn Cebo de Campo Iberian ham, which is available in whole piece and sliced and is made from 100% Iberian breed pigs.

These pigs are initially fed on natural grain, which is then supplemented with the environment’s natural meadows where they had lived in freedom.

The Cebo de Campo Iberian ham requires at least 24 months to cure; whether or not this time is extended depends on the ham’s size and the quantity of fat in the leg.

Although they may appear to be identical at first glance, there are some distinctions that make a Cebo de Campo Iberian ham noticeably superior.

The main difference between these two pigs during upbringing is that the Iberian Cebo pig spends its entire life in pens and is given just feed, while the Cebo de Campo pig lives part of its life in the wild and during this period it completes its diet with natural pasture and even fruit.

Once the animal has been slaughtered, the curing of both hams is very similar, with a minimum curing period of 24 months and visually, they can look alike. However, when we start to cut the ham, we can observe that the fat infiltration, or marbling, and the colour might change. Without any doubt, the Cebo de Campo ham will have a better appearance.

Due to the length of time they spent living in the wild and the food they have been fed, the flavour of a Cebo de Campo ham is richer and the texture is more delicate in the tongue.

At the same time, Cebo de Campo hams of a 75% or 100% Iberian breed are more common, whereas Cebo hams typically originate from 50% breed. This is because the best breeds of pigs are used, as they are best cared for. However, occasionally there aren’t enough acorns for all the pigs, so some of them just receive feed and natural pasture.

The main factor that will enable us to distinguish one ham from another is the certification. A Cebo ham’s seal is white, while a Cebo de Campo ham’s is green. We advise against purchasing any Iberian ham that is not marked with the seal because this certification ensures the quality of the item we are purchasing.

The Cebo de Campo ham has a larger percentage of oleic acid, which is very good for our health, if we consider the advantages of each ham separately.

IT IS NO LONGER IDENTIFIED AS RECEBO HAM

Prior to the introduction of colour certifications, the Cebo de Campo ham was called Recebo ham, but this name is no longer used because it may provide the wrong impression about the calibre of the product. These pigs are superior to Cebo hams in value and quality since they are not overly fattened, have had a natural breeding, have lived in freedom, and have had various forms of more natural food.

The Iberian Cebo ham is also a high-quality product. Despite the fact that ham from pigs raised in a free-range environment is superior, a Cebo ham is nevertheless quite good. It will always depend on how much room the animal has in the pen and the calibre of the food they are supplied.

At Gastronomic Spain we provide a large selection of Cebo hams presented in whole leg and in different cuts such as: boneless and polished, sliced by machine or knife or cut in cubes or long pieces of 500 gr. or 1 kg.