WHERE CAN I BUY THE BEST TERUEL HAM ONLINE?

If you don't know where to buy a good Teruel ham online, the Gastronomic Spain shop will be your best ally. Gastronomic Spain is an online shop that offers the best products of the Spanish cuisine, in other words, all those traditional foods that are used in Spanish meals. 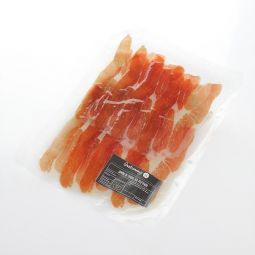 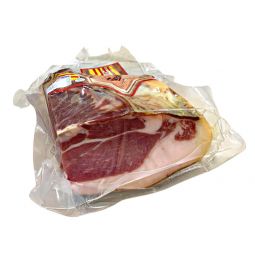 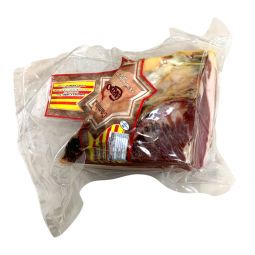 Ham is undoubtedly one of the most traditional products that is always present in every household. In particular, the Teruel Ham, is one of the best delicatessens.

Buy in Gastronomic Spain those typical Spanish products that you most desire. We are aware that, especially, the Teruel ham is very difficult to find outside Spain, so the Gastronomic Spain online shop will be your greatest discovery. Free shipping to all Europe with minimum orders of 79,99.

From now on, you can enjoy the best typical Spanish products, among them, the Teruel ham, wherever you are. High quality and affordable prices always come with Gastronomic Spain.

The minimum curing of Teruel ham is determined by the Teruel Ham Regulatory Council, which is the organization that defends and promotes Teruel PDO ham and PDO shoulder. It establishes that a Teruel ham cannot have a minimum weight of 7 kg if it is cured for less than 14 months. In addition, the curing of the leg of Teruel has to be carried out at an altitude higher than 800 meters in height and always within the province of Teruel.

When buy Teruel PDO shoulder, keep in mind that as with a Teruel ham or an Iberian ham, it guarantees a specific preparation, feeding and curing. In this case, the feed and breed of the pig is the same as that of the Teruel PDO ham, since they come from the same animal. The largue white, landrace and duroc breed are the ones used and the only ones admitted by the PDO Jamon de Teruel.

TERUEL HAM WAS THE FIRST ONE WITH DESIGNATION OF ORIGIN

The Teruel ham was the first Serrano ham with Denomination of Origin (DO) of its own in Spain. This designation guarantees excellent quality and exclusivity as its production, transformation and elaboration are carried out in a specific geographical area, in this case Teruel, with specific, recognised and verified knowledge.

Therefore, the Teruel ham was included, in March 1997, in the list of European quality products. In fact, the Teruel Ham DOP is considered the best Serrano ham.

To know how to identify a Teruel PDO ham, we must take into account different characteristics that this type of cured ham has.

The main characteristics of Teruel ham are:

In order to identify a Teruel ham, we must take into account different characteristics of this type of cured ham.

The first characteristic, and previously mentioned, is that it was the first ham, both Iberico and Serrano ham, to obtain the Designation of Origin in Spain. Moreover, as it is a DOP ham, its production area is located, exclusively, in the province of Teruel, whose minimum altitude is 800 meters above sea level, in cold, dry, clean and pure environments, without fog or humidity and free from any contamination.

This environment determines its aroma and taste that so much characterizes this Teruel ham. This would be one of the large differences with Serrano hams, which are allowed to age without temperature control and without a determinate altitude for drying.

On the other hand, the Teruel ham comes from crosses of pig breeds. These include the Landrace breed (standard type) and the Large White breed, in relation to the mother. Whereas the father would be Duroc breed. These breeds make it possible to obtain white pigs’ hind legs of dietary quality with low cholesterol levels.

Finally, the unique factors that characterise the authenticity of Jamón de Teruel are the numbered band that surrounds the product, the conservation of the hoof and the star branded on the rind, followed by the word TERUEL. In the case of sliced formats, it must bear a back label sealed by the Regulatory Council, which guarantees the Designation of Origin of the product.

NEW CERTIFICATIONS OF HAM FROM TERUEL AND SHOULDER OF TERUEL

In order to create a greater differentiation of the Teruel ham and value the curing of this ham leg compared to the rest. New certifications based on WEIGHT AND HEALING have been created.

The current white certification will be maintained and 2 new ones will be added: the red and the black. These certifications do not imply a change in the elaboration or in the curing process, but an indication for the consumer of the characteristics of said Teruel leg.

This new certification will integrate both the Teruel ham and the Teruel Shoulder. Ham dryers do not have the obligation to integrate and benefit from them. Next we will explain the new badges that will come into effect in June.

Blue distinctive: it indicates that the Teruel ham has a minimum of 14 months of curing and a minimum weight of 7 kg. These are the minimum requirements for a Teruel ham to have the Designation of Origin. The seal is blue

Black Badge: it is the highest certification within Teruel ham, it indicates that the ham has a minimum weight of 9 kg and a minimum curing of 22 months. The seal is black

These new certifications are not mandatory and indicate a minimum, so that does not mean that a Teruel ham with this mark cannot have a weight of 9 kg and 24 months of curing. The typical white certification will remain in force and will be considered a generic certification that encompasses everyone.

Blue badge: it indicates that the Teruel shoulder has a minimum of 9 months of curing and a minimum weight of 4.5 kg. These are the minimum requirements for a Teruel pallet to have the Designation of Origin. The seal is blue and the minimum established weight and curing characteristics are indicated.

Red badge: this new certification indicates that in addition to being a Teruel PDO shoulder, the minimum curing period of this ham is 10 months and its minimum weight is 5 kg. The seal on this pallet is red.

Black Badge: as in ham, this is the highest certification for a Teruel PDO shoulder, it indicates that the shoulder has a minimum weight of 5.5 kg and a minimum curing time of 11 months. The seal is black

In the same way that happens with the Teruel DOP ham, also with the TERUEL DOP shoulders These new certifications are not mandatory and indicate a minimum, so that does not mean that a Teruel shoulder with a white distinctive can not have a weight of 5.5 kg and 11 months of curing. The typical white certification will remain in force and will be considered a generic certification that encompasses everyone.

Calamocha is a Spanish municipality located northwest of the province of Teruel, just 70 km. Calamocha is located on the banks of the Jiloca River and in the Cantabrian-Mediterranean Corridor, one of the main transport hubs in Spain that connects Valencia, Zaragoza and Bilbao.

Calamocha is the most important town in the northwestern third of the province and stands out for its agri-food industry. But without a doubt, Calamocha is known as one of the main producers of Teruel Ham (Jamón de Teruel).

Teruel ham Calamocha gives off an intense smell, as well as a characteristic flavor. Calamocha hams are also part of the Designation of Origin and it is the result of a quality product since the raw material and the Calamocha climate give form to an exquisite product for any palate.

IN GASTRONIMIC SPAIN The Teruel ham offered in Gastronomic Spain is a first quality ham and is at an affordable price. It arrives at your home, directly, from the facilities of Teruel. A real luxury for a Spanish person living outside Spain.

Now we are going to show you the several formats of Jamón de Teruel that you can find in the online shop of Gastronomic Spain.

Do you dream of having a ham leg in your kitchen? Buy the leg of Jamón de Teruel in Gastronomic Spain and your dreams will come true. Forget about complications, shipping and transport. Buying ham from Teruel in our online shop will be easy and simple, as well as economical.

If you are one of those who has no time or is lazy to cut the ham leg from the ham holder, the Jamón de Teruel in sliced format will be the perfect choice.

You can also enjoy a knife-cut ham format, for those more selective people. Both formats will be a good choice because both come from the best Jamón de Teruel that exists in the market.

Finally, you can also enjoy the best ham in Teruel in maza format. The maza is where the hind leg has more meat. It is the main part of the ham, the richest and juiciest, which contains the greatest amount of lean. Enjoy a boneless Teruel ham in one whole piece.

An excellent Teruel DOP shoulder with a weight of 5 kg and a minimum aging period of 10 months. It comes in a whole leg, with a hoof and certified.

If you are looking for a custom-made ham holder to cut your Teruel ham perfectly, we have an entire section dedicated to ham holders and the different knives types.

Depending on the purpose, it is recommended a ham holder or other. Click on this link and find out which ham holder and knife fits your needs.