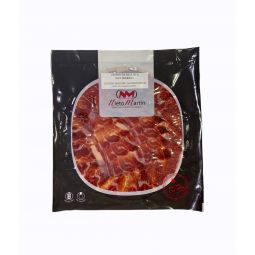 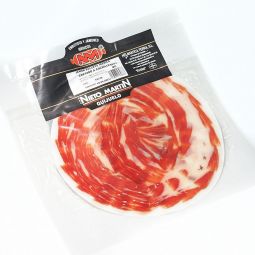 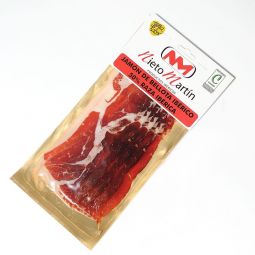 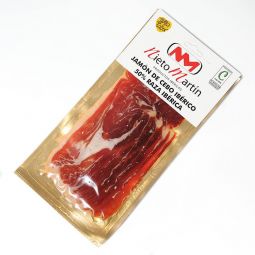 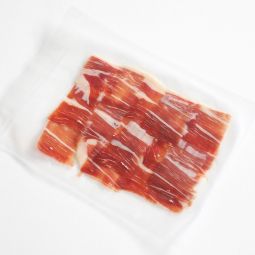 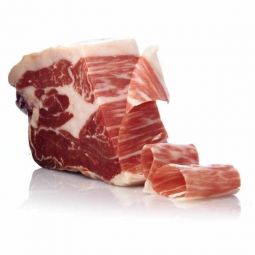 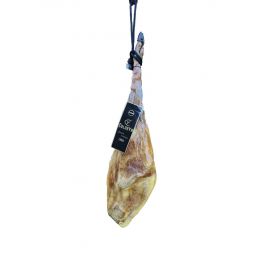 When it comes to buying an Iberian ham you have to take into account some factors such as: the kind of certification of the ham and if you want it with some particular origin denomination or not.

The fact is that both factors are going to determine the quality of the ham that you are going to buy and consequently the price of it.

Iberian ham tag is simply a certification that guarantees the breed, the feeding, the raising and the curing that the pork from which the ham comes has had.

When we talk about Iberian hams tags, we are referring to the band or the seal which is placed in the ham’s knuckle and that it cannot be taken off without breaking it. This seal or tag certifies the quality of the ham that you have purchased.

Ham’s labels have been approved by the Agricultural Ministry to provide the origin and the characteristics of the ham concerned. It is essential not to purchase Iberian non-certified hams, since for sure they are not the hams that they are trying to sell.

When we talk about tags’ colors of Iberian ham, we can find different labels in the market:

The Iberian ham with the black tag that has the black band. This black distinctive indicates that the breed of the ham is 100% Iberian and that not only has been fed with acorn, but also has lived on freedom. It is undoubtedly the most expensive and valued ham. Its curing can be over 48 months. It has an amazing taste.

The Iberian ham with the red tag has the red band. This red distinctive indicates that the breed of the ham could be 50% or 70% of Iberian purity. The Iberian hybrid breed has been carried out with Duroc breed porks. It has been fed with acorn and natural pastures, in addition to living on freedom. Its curing could be over 36 months.

The Iberian ham with the green tag has the green band. This green tag certifies that the Iberian pork has lived on freedom and has been fed with natural pastures.

In the case of Cebo de campo pork and in contrast to the other certifications, the distinctive does not mention the purity of the breed. This means that you can find Recebo hams with purity from 50% to 100% that are under the same distinctive. Its curing is used to be around 24 months.

The Iberian ham with the white tag has the white band. This distinctive verifies that the Iberian pork has lived in captivity. It has been fed with fodder and in addition to having at least 50% Iberian breed. Its curing is used to be at least 24 months.

As we have indicated on occasion, only hams obtained from Iberian porks of at least 50% Iberian breed and which have been reared and cured in the Iberian Peninsula are considered Iberian hams.

As you know, all hams that accomplish these characteristics obtain the Iberian ham certification from the Agricultural Ministry. However, there are some business associations in different parts of Spain that have decided to create a Denomination of Origin for Iberian ham not only to guarantee a standard of quality, but also to protect and promote their brand.

The certificate of Iberian breed only occurs in Spain. We can distinguish 5 denominations of Iberian ham origin:

Iberian Guijuelo ham is covered by the designation of Guijuelo origin, located in the municipality of Guijuelo (Salamanca). Of all the designations of origin, it is the most commercial and well-known ham. Salamanca ham is a quality one. The predominant breed is usually 50% Iberian, especially in Cebo ham.

Iberian Guijuelo ham is the first Spanish Denomination of Origin for Iberian ham to be created.

Iberian-Extremadura ham is an excellent one. For many people, it is considered the best Iberian ham in Spain. It is produced in the Extremadura meadow. The Extremaduran denomination of origin uses only 75% and 100% Iberian pork.

In this Denomination of Origin, no fattened hams with white tags or bands are produced. All of the Denomination of Extremaduran origin porks are free-range. For this reason, we will only find black, red and green tag hams.

Only hams that come from 100% Iberian porks that have been free-range are considered to be Denomination of Jabugo Origin ones.

All hams from certified porks live in freedom and in ideal conditions to produce an excellent Iberian ham.

After having explained the different labels and Denominations of Origin that produce Iberian ham, it is important to decide what type of Iberian ham you need and how much you are willing to pay for it.

When buying an Iberian ham, take into account how many of you are at home when it comes to eating it and your skill with a knife. This way you will be able to determine whether you want a whole leg of ham or a ham packed in packets.

At Gastronomic Spain we offer you a wide variety of Iberian hams from all the Denominations of Origin. We also offer you the possibility of acquiring whole hams, boneless hams and even in envelopes, cut by machine or knife.

Are you looking for a 100% Iberian Cebo ham?

At Gastronomic Spain we can offer you Iberian hams from the Sierra de Andujar (Andalusia) of 100% Iberian breed but with the Cebo de campo certification.

In other words, hams obtained from purebred Iberian porks that have lived in freedom and have been fed on natural feed and pasture. A real delight and a great opportunity to obtain a pure-bred ham at an affordable price.