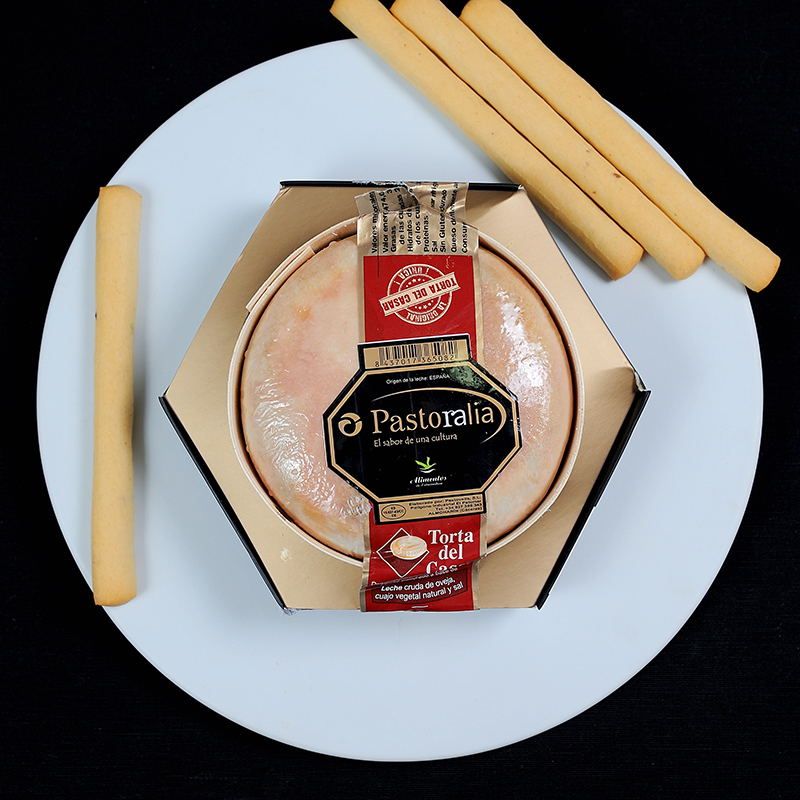 Torta del Casar 620 gr. It is an authentic Spanish product. It is a creamy cheese made in Extremadura, on the border of the provinces of Badajoz and Cáceres, an area known as "del Casar".

This area where Torta del Casar is made 620 gr. It is of sandy soils, of little fertility and little thickness. Perfect conditions to result in one of the best cheeses in Spain with a Protected Designation of Origin.

Are you a cheese lover? Consult the catalog that you have in Gastronomic Spain.

Our Torta del Casar is 620 gr. approximate net weight. A perfect format to enjoy with family or friends.

It is a cheese made with raw sheep's milk, vegetable rennet and salt. Thanks to its ingredients and production process, it acquires a dairy and vegetable aroma, as well as an intense but delicious flavor on the palate.

It has a cylindrical shape, with substantially flat faces and rounded edges. It is made up of a semi-hard, yellowish, soft and unctuous crust. Although its greatest feature is the creaminess of its interior.

Without a doubt, Torta del Casar by Pastoralia is one of the best Spanish products. Pastoralia is in charge of the manufacture and elaboration of our Tortas del Casar with Protected Designation of Origin, as well as the main producers of Extremadura sheep and goat cheeses.

Torta del Casar 620 gr. It is protected by the Protected Designation of Origin. To distinguish this Denomination, the cream cheese is surrounded by an exclusive numbered red and gold control label, which contributes the common element that differs from any other cheese with similar characteristics, guarantee of origin and tradition.

How to preserve and consume the Torta del Casar 620 gr.

According to the Regulatory Council, to maintain correct consumption and conservation of Torta del Casar, the following guidelines were established:

Do you live in a city in Europe? Are you one of those who love Spanish cheese?

Gastronomic Spain is your solution. The largest online store with Spanish products from all regions, with the best quality and the best price.

Enjoy our great gastronomic offer in Spain from anywhere in Europe. Free shipping!