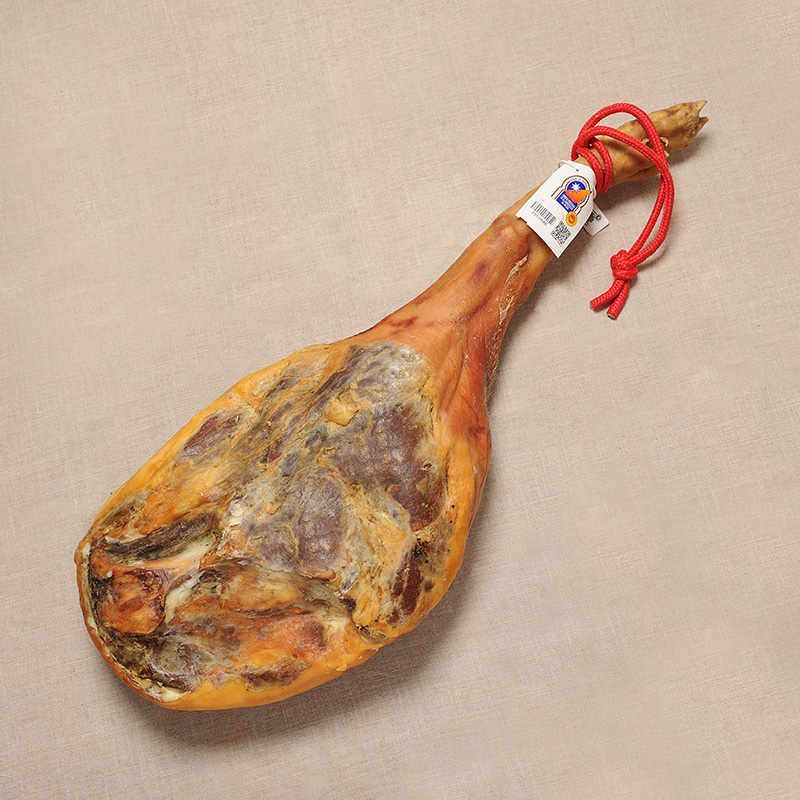 Buy a Teruel ham leg at an incredible price

We all like to eat cured ham and I'm sure it won't be long before someone invents a vegan ham. Patience. If you are one of those who are not satisfied with just ordinary serrano ham and are looking for a gran reserva ham, we recommend the Teruel ham leg. It is a well cured ham, carefully prepared, big and with a really ham flavour.

Sometimes it is worthy to buy an Iberico ham, but if you are looking for a good Serrano ham to eat every day, I recommend you to see the different Teruel hams and Gran Reserva hams that we offer you.

When you buy a Teruel PDO ham, you are buying a certified ham of the highest quality. It is by many considered the best white pork ham in Spain

This Spanish ham is the best, the Teruel ham leg is salty rightly and the right proportion of fat. If you are looking for a cheap Teruel ham leg, you are in the right ham shop.

Teruel ham is cured for a minimum of 18 months. This white ham comes from the Duroc breed pig, which is crossed with Iberico pigs.

So, if you are good with a ham knife, the first thing you have to do is buy a ham holder and then buy this Teruel ham leg. A whole ham leg is enjoyable, cutting ham is a luxury that we all appreciate. If you are going to put it in the kitchen, we recommend you use a ham cover. A cloth is enough to preserve this Serrano ham, that's very important.

It should be noted that our Teruel ham with Denomination of Origin comes from Calamocha, a municipality located 70 km from Teruel that stands out for its agri-food industry. Calamocha is considered one of the main producers of Teruel Ham and the result is an exceptional product.

How to differentiate a Teruel ham leg from a reserve ham.

Teruel ham is visually characterized by its certification. All Teruel hams have a white seal with the Teruel PDO seal around the knuckle, in addition to the Mudejar star engraved in Fire on the bark. You can find them with the whole crust or with the crust in a "V" shape. In addition, its ends are rounded and unlike the reserve ham without Teruel PDO, it maintains the hoof, which is white.

How to start a Teruel PDO ham

Many of you wonder how to start a ham. When starting a ham, the first thing you have to do is:

I advise you to save the large pieces of bacon and rind that you have obtained from peeling the ham to cover the part of the ham that you have cut during the first days. This will prevent the Serrano de Teruel PDO from drying out and will maintain its juiciness and shine.

If you have any doubts, you can see our tutorial to cut a ham on our Gastronomic Spain blog.

How to preserve Teruel PDO ham

It is very common to have a ham at home to cut to size. Depending on the type of family and the reason for the purchase, the ham will last more or less. In the event that the ham is not going to be consumed at the moment, which is the most common, the following recommendations must be followed when preserving the Teruel PDO ham:

Denomination of Origin of Teruel

https://www.gastronomicspain.com/en/teruel-ham/teruel-ham-leg.html 12015 Teruel Ham Leg <h2>Teruel Ham Leg, a perfect delicacy</h2> <p><strong>Teruel ham leg</strong> is possibly the best white <strong>pork serrano ham</strong>. Buy our Teruel ham leg, a natural ham with a quality guarantee.</p> <p>The little pleasures are the ones that are most enjoyed, it is the law of life. Possibly we all have <strong>Serrano ham</strong> in the fridge or a leg of ham hooked to the ham holder, very typical of the Spanish.</p> <p>We do not realize that we have before us, in our day to day, a culinary jewel fallen from heaven. We have so internalized the Serrano ham that we are not aware of the delicious product we eat. And the <strong>Teruel ham</strong> is no wonder, since it was the first Serrano ham in Spain to be awarded the <strong>Denomination of Origin</strong>. A luxury!</p> <p>7.5 kg - 8 kg. net weight (approximate)</p> <p>Denomination of Origin of Teruel</p> <p>Jamones Carbó</p> https://www.gastronomicspain.com/3407-home_default/teruel-ham-leg.jpg 136.8226 instock JAMONES CARBO SL 150.3545 136.8226 8.9999966745259 13.5319 2017-01-31T16:21:26+0100 /My Way /SPANISH HAMS /My Way/Gluten Free /My Way/Lactose Free /Sales /Categoría 4% /iva 10% /SPANISH HAMS/SERRANO HAM /SPANISH HAMS/SERRANO HAM/Teruel Ham /HAMS AND SHOULDERS ham serrano teruel jamon d.o. do d o serano hamon schinken speck serranoschinken seranoschinken luftgetrocknet air dried bodega curado cured denominacion de origen spanish gran reserva certificado Sin Gluten sans Gluten Without gluten Free gluten Ohne Gluten pata de jamón pierna de jamón Teruel Ham Leg Teruel Schinkenkeule Jambon de Teruel enterier
