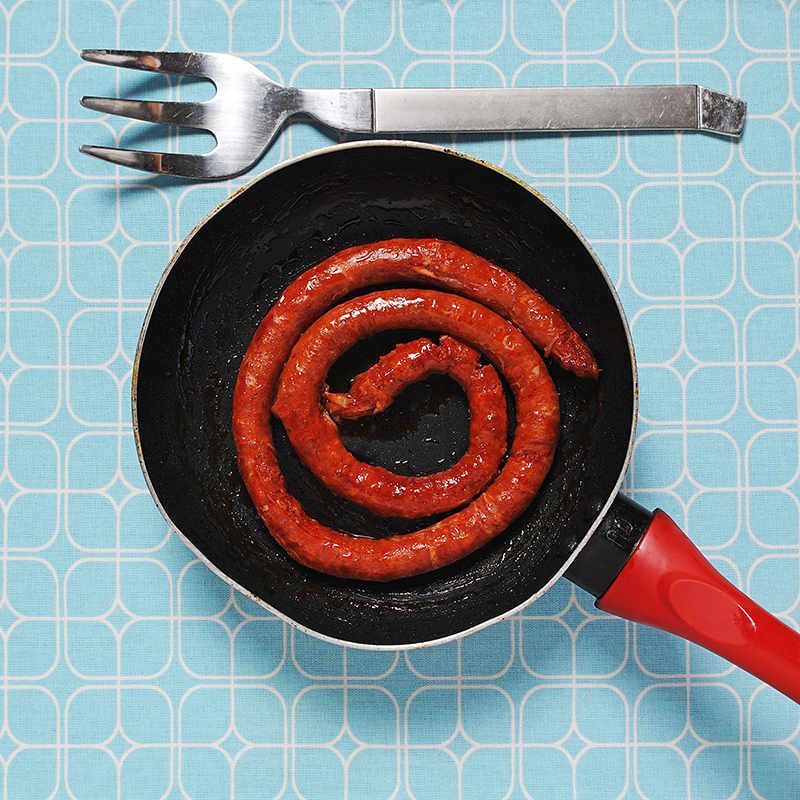 Chistorra or Txistorra is a type of sausage typical of Navarra and is made with minced pork, garlic, salt and paprika. Ingredient which gives it that characteristic red color.

Are you a lover of Spanish chorizos? Click here and discover the catalog.

The chistorra is characterized by being a fresh Spanish sausage with a diameter of 1 cm, very elongated and fine. In addition, it usually cures for a very short time, approximately 24 hours between 2 and 8ºC.

Depending on the area, the chistorra is called in a different way. Its most common and well-known name is ''chistorra'', but it is also called biriki in some towns in Navarra; in the Aragonese Pyrenees it is known as txistorra (made only with meat); in Jaca there is another variety that includes other offal of the pig and is known as arbiello; while in the province of León it adopts the same name but is made with larger amounts of beef.

In general, the chistorra is the chorizo consumed fried or roasted. Or more commonly, grilled chistorra. The whole chistorra is usually fried but served in pieces as a tapa (tapa de chistorra).

The sausages have many ways of elaboration and of being produced, as it happens with the Txistorra. But the traditional process that characterizes it is always maintained:

Now what do you fancy a chistorra sandwich?

Difference between chistorra and Spanish chorizo

Both the chistorra and the Spanish chorizo are very similar, in fact the chistorra is considered a type of Navarrese chorizo. But there are some differences between both sausages:

If you are interested in buying Spanish chorizo or another type of sausage, check our category.

Without a doubt, chistorra, as well as sausage in general, are very typical products of Spain and rare outside of it. Enjoy your favorite Spanish food from any city in Europe with totally FREE shipping thanks to the Gastronomic Spain online store.

What are you waiting for in savoring Spanish pleasure?