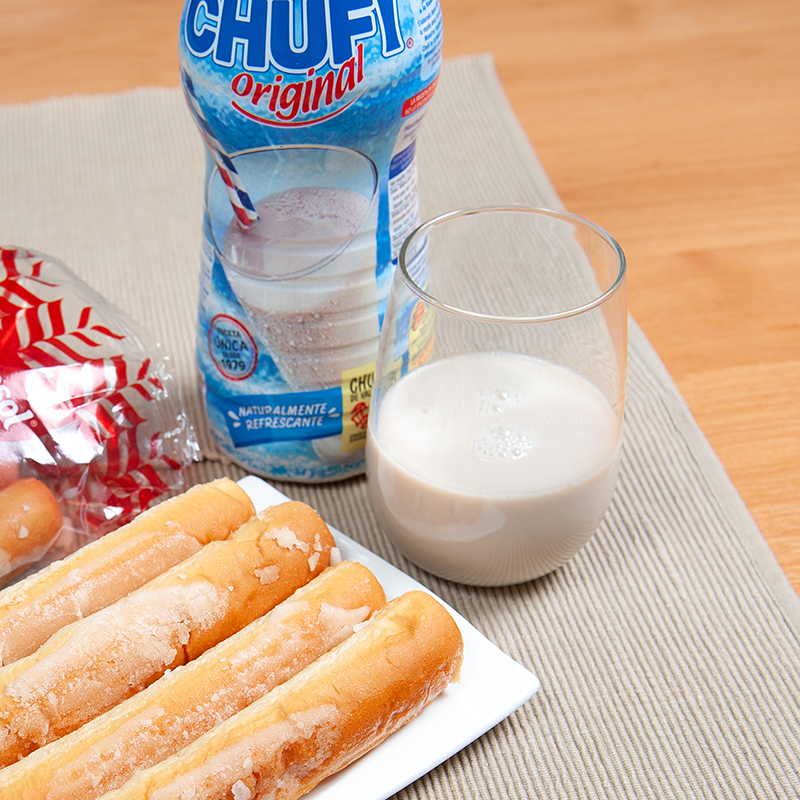 Horchata is a drink from Valencia that has become popular all over Spain. It is a drink that is served very cold and is ideal for fighting the heat during the summer months. Of all the different Horchata Drinks that can be found on the market, Horchata Drink Chufi is undoubtedly the best known.

Its recipe dates back to 1979 and it is made with tiger nuts from Valencia, certified by the Regulatory Council of the Designation of Origin Chufa de Valencia (Valencian tiger nut).

Horchata is a drink made from yellow nutsedge, a tiny tuber that has its origin in the region of Valencia, particularly in the town of Alboraia. From this tuber a chufa milk is obtained, which gives as a result Horchata. Of all the Horchata Drinks that are marketed, Horchata Drink Chufi is the most well-known. It is made with tiger nut milk with Designation of Origin and is very popular due to its taste and price. We offer the Horchata Drink Chufi in a 1 litre format in a plastic bottle with a screw cap for easy transport.

It is a drink that has to be consumed cold and it is important to shake it before serving it in a glass, in order to mix its content well. It is a very popular drink during the summer months, although in the Valencian Community it is consumed all year round. This is a drink that is usually consumed in different ways:

Drink in a glass with a straw

To drink as a slush drink: To do so, keep the Horchata Drink in the freezer for at least 2 hours. When it starts to freeze, shake the bottle and serve in a glass.
Accompanied by some fartons: The fartons are typical sweets from Valencia, they are usually consumed with the Horchata. Due to their consistency and their elongated shape, they can be dipped in the glass of Horchata Drink without breaking.

Horchata Drink Chufi is characterised by its pale white colour, it is a homogeneous liquid, without lumps. In the mouth it has a liquid texture, it is not thick and is very easy to digest. Once opened, it should be kept in the fridge and consumed withing 2 days.

Horchata is one of those drinks that make foreigners fall in love with when they try it. It is only produced in Spain and that is why it is very difficult to find it abroad. With the appearance of other vegetable milks, such as soy milk or oat milk, its consumption has become much more popular. Some consumers use it in their daily lives, sometimes even to mix into coffee, as its sweetness makes is unnecessary to add sugar.

weight:
1 L.
WITH GLUTEN
No
no
PRODUCT BIO
No
no
VEGAN PRODUCT
Si
no