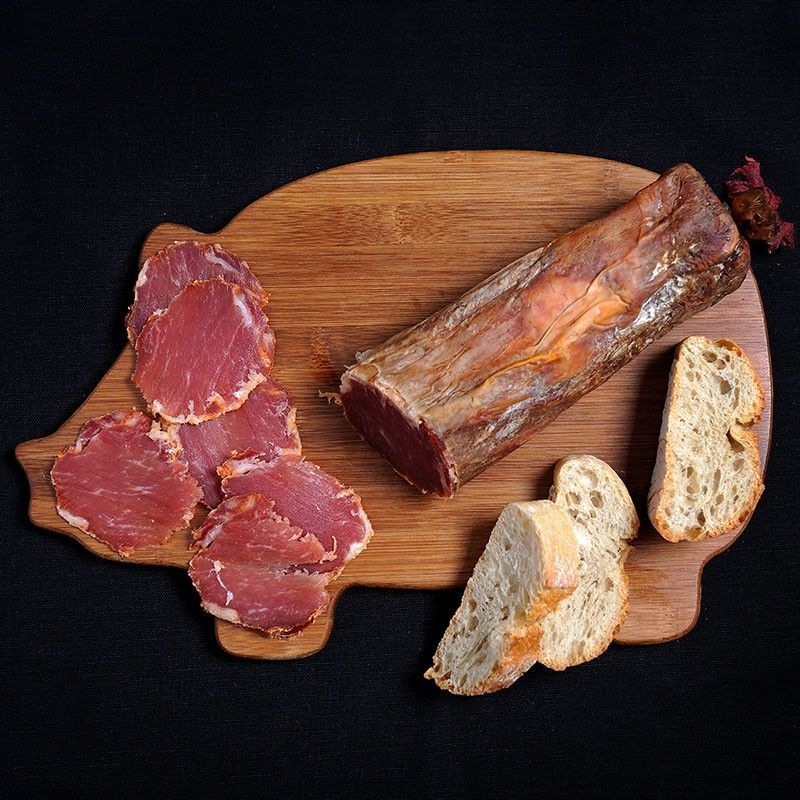 Lomo Ibérico de Bellota is probably the most prized Iberico pork cold meat. Our cured loin comes from the region of Salamanca, it’s aired, firm and it has a fine flavour. Bellota loin could be considered as marinated loin, as it is seasoned before curing to create its so characteristic flavour.

This typical Iberico bellota loin comes from Iberico pork, as its name suggest. Iberian pig breed is native from Spain, and it is considered to be one of the best breeds. This is the reason why Iberico bellota loin, as well as Iberian loin or Iberian meat in general, are so recognised and well-placed.

As well as Lomo Ibérico de Bellota, Iberico Bellota pork loin also comes from the region of Salamanca, which has the perfect climate for the curation of cold meats. Iberico bellota loin is, without any doubt, the most prized Iberian pig cold meat.

Bellota is the distinctive it’s given for two reasons: the way pigs Iberian pigs are fed, on the one hand, and the pureness of their breed, on the other hand. This way, Iberian pork is considered to be one of the best breeds of pig. Moreover, it is native from Spain. That’s why Iberian meat and, concretely, Iberico bellota loin is considered to be a spectacle for our palates.

Our bellota pork loin has an unmistakable flavour and, those who taste it are aware and want more. Its special flavour remains in your palate. The explosion of tasty sensations is out of this world. No doubt, with a bite of Iberian bellota loin you won’t have enough.

Iberico Bellota loin comes in a complete piece of 400 g. And we recommend letting it air for about 15 minutes before its consumption. You will enjoy this great Iberian product no matter the way you take it. If you are not going to consume it at once, we advise you to keep it in the fridge wrapped in a cloth. It’s perfect to be cut with a slicer.

Its colour, infiltrated fat and scent make of this product a delicacy. Then, do not fight it anymore and captivate your palate with the online shop of Gastronomic Spain. FREE deliveries all over Europe.

And don’t forget that, as well as Iberico bellota pork loin, we also have other typical products of Spanish gastronomy, especially for you. Check our online supermarket.