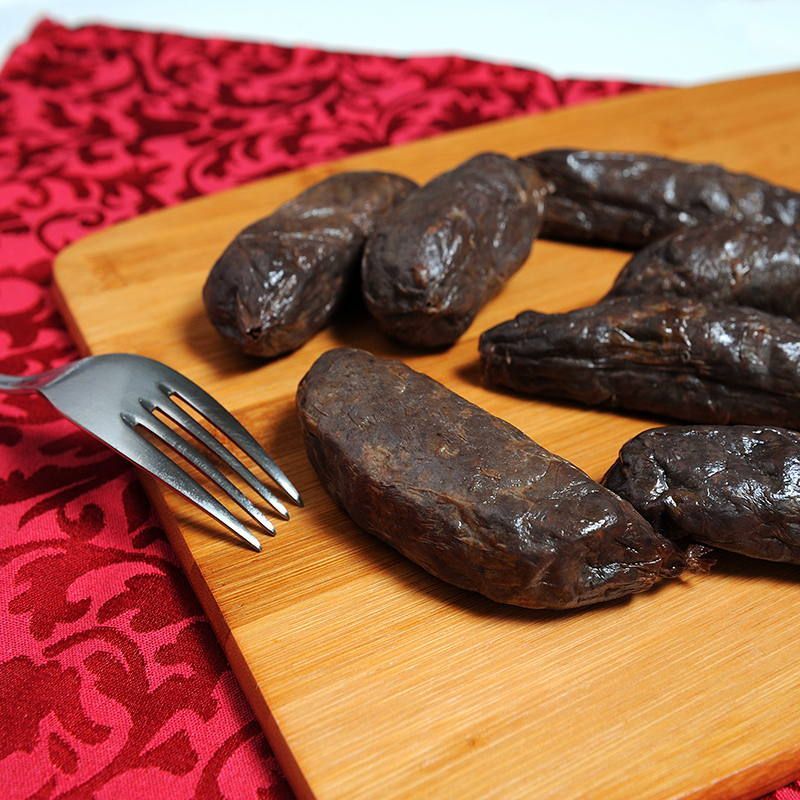 What are Onion Black Pudding?

Onion black pudding (morcilla de cebolla) is a very traditional and common type of Spanish sausage in Spanish homes. It is a type of blood sausage that is made in many regions of Spain, although it is very common on the Levantine coast and León, which is also called the Valencian blood sausage (Morcilla valenciana) and morcilla de León.

The onion blood sausage from Casa Toribio is one of the most popular in Spain, but in the same way it is very difficult to buy onion blood sausage outside of Spain. Gastronomic Spain has an extensive catalog of different types of Spanish black pudding with FREE shipping throughout Europe.

One of its main characteristics is that it is a black pudding. The aeration of the blood sausages helps the product to withstand the trip in its perfect conditions and stay in its optimal conditions. It has an expiration of 30 days from its vacuum packaging.

Our onion sausage has a soft, inelastic, cohesive and not very fibrous consistency and, in addition, it is presented in the shape of a cylinder, with a diameter of about 3,4-3,6 centimeters and a tie length of between 6-10 centimeters.

The onion black pudding has a darkened, almost black color. While when cut, this Spanish sausage stands out for the fried onion inside.

On the other hand, Casa Toribio's aired onion blood sausage is low in fat and certified with the Plan Cuidate + of the Ministry of Health for the reduction of salt and fat in traditional sausages. It is a 100% natural onion black pudding, without preservatives, dyes, gluten or lactose.

Ingredients of the onion black pudding

The ingredients to cook the onion black pudding are very simple, you only need:

How to cook black pudding with onion

To make or cook black pudding with onion it is important to have the ingredients (discussed above) clear for its preparation.

The steps of how to cook blood sausage with onion are as follows:

Casa Toribio is a family business located in Xirivella, a town in Valencia. It is a company dedicated to the production of sausages with more than 100 years of experience.

The botifarres (spanish sausages) of Casa Toribio are characterized by the quality of the first and the tradition with which they are made. In fact, they have been repeatedly recognized for their quality and good work in the Valencian Community Handicraft Awards or to the company as the Mostra d'Aliments Tradicionals de Valencia.

The onion sausages that we offer from Casa Toribio and Gastronomic Spain are 100% natural without preservatives, colorants, gluten or lactose free.

There are endless dishes and recipes that we can use with our onion black pudding. Some of the recipes with onion blood sausage are:

These are some of the suggestions proposed by Gastronomic Spain, but the black pudding with onion is a very versatile and delicious product to accompany thousands of dishes.

Onion black pudding is one of the most difficult products to find abroad. With Gastronomic Spain the excuses are over.

Buying onion black pudding online is possible with the Gastronomic Spain online store, the store specializing in FREE shipping throughout Europe with more than 1000 products of Spanish gastronomy.

shipped in isothermal container with refrigeration