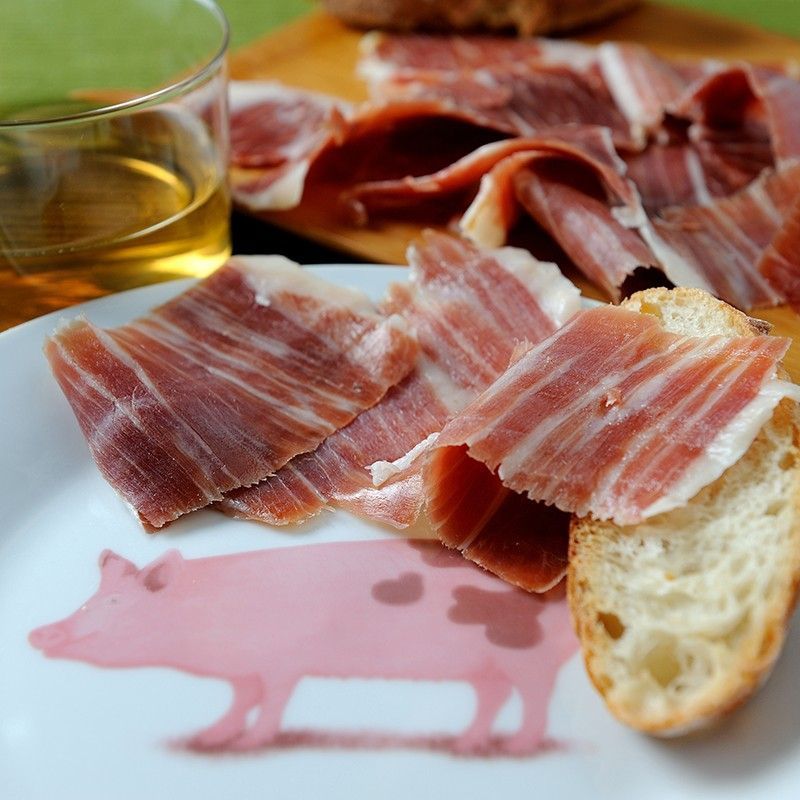 The packet of Iberico Cebo de Campo Ham cut with a knife is cured for 24 months. The ham is cut with a knife because it tastes better that way. Then, we wrap it in 100 gr packets so that you can enjoy it at any time of the day and from anywhere in Europe. Remember that in Gastronomic Spain you have FREE shipping.

Cut with a knife is an art in itself. So do not hesitate any longer and enjoy the authentic Spanish pleasure with this Iberico Cebo de Campo Ham made from 100% Iberian pigs, which gives it a spectacular flavour.

The Iberico Cebo de Campo Ham cut with knife is a Spanish product ideal for the most demanding palates. It is an Iberian ham with a slightly higher price per kilo than the usual ones, as it has been cut by hand.

If you want to buy hand-cut Iberian ham, this product is a great option, given its good value for money and its FREE shipping all over Europe!

Gastronomic Spain not only has knife-cut ham, but you can also buy Iberian ham in different formats, such as sliced, in mace (thickest part of the ham) or the whole leg. Always to your taste but with the best quality.

Iberico Cebo de Campo Ham is so called because of the type of experience that the pigs themselves have been involved in. Specifically, it comes from 100% Iberian pigs, which is a very important characteristic of this incredible ham. In addition, they are fed on animal feed, but during the fattening stage they live in the pastures of Andalusia and are fed on acorns.

Thus, it is considered to be one of the highest quality Iberian hams, after the Pata Negra or Bellota.

*The same product is also available in sliced format.

Ibéricos Coloryn are in charge of the breeding and the whole production process of our Iberico Cebo de Campo Ham cut with knife.

The Coloryn farm is located in a valley full of holm oaks of 330 hectares and is located in Sierra Morena, the nerve centre of the Iberian pig in Andalusia.

Cut with a knife