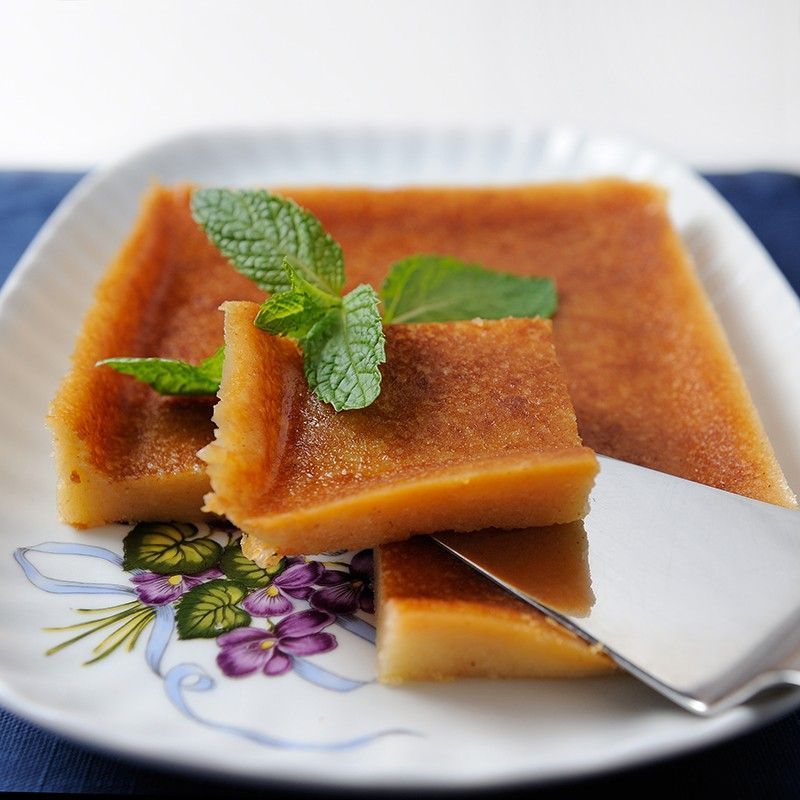 The Pasiega Milk Cake is a typical dessert in the Valles Pasiegos of Cantabria. Its mild, balanced and sweet flavour characterises this great sweet made from curdled milk, butter and sugar. It is a dessert cooked in the oven and can be served both cool and hot.

The Pasiega Milk Cake from Cantabria is sweet, has a consistency similar to pudding and is perfect to be served with a cup of coffee. Do you want to taste it?

What is Pasiega Milk Cake?

The Pasiega Milk Cake is an inimitable dessert, perfect to be served with a cup of coffee and is a benchmark in the gastronomy of Cantabria.

The Pasiega Milk Cake is originally from the Valles Pasiegos of Cantabria, and, with the “sobaos”, are a benchmark of the regional baking of Cantabria. It is a traditional dessert, which is also tasty and balanced. It is amazing!

If you are a Spanish dessert lover, you can consult our catalogue HERE.

One of the curious facts about this Pasiega Milk Cake is that it does not have cheese, so it has a different flavour compared to other cheesecakes, although they bear a strong resemblance.

But its main characteristic is the quality of its raw materials, obtained from the Pasiega zone, like its elaboration, which continues the tradition and family legacy.

The Pasiega Milk Cake is artisanally made from curdled milk. With its gold surface and its mild consistency, similar to that of the pudding, it is an authentic delicacy. The cinnamon and lemon give it the perfect touch to its mild flavour and subtly sweetness.

Here you have the recipe of the Pasiega Mild Cake:

2. Separately, mix the curd, the zest of half a lemon and a pinch of ground cinnamon.

3. Add it to the first mix and mix everything again, until you have an homogenous mix.

4. Add little by little flour while you mass.

5. Introduce the mix in the mould (the mass should not exceed 3 cm)..

6. Introduce it in the oven for half an hour (200ºC) until the surface is browned.

7. Finally, remove from the oven and enjoy this traditional Spanish dessert.

It is a simple and easy recipe that can be enjoyed as a breakfast, as a snack or a dessert. You can serve it either cool or hot.

Contains gluten, eggs and/or their derivatives and contains lactose

Enjoy this Pasiega Milk Cake made from selected and traditional raw materials from the Valles Pasiegos. It does not matter if you live far from Spain, in Gastronomic Spain you can buy Pasiega Milk Cake online with shipping to all Europe, directly from Spain.

Our online shop of Spanish food offers the greatest Spanish food catalogue available for all Europe, from traditional desserts, jam, appetisers up to the most outstanding wines.

Do not hesitate longer and place an order in Gastronomic Spain, with free shipping in orders over 79.99€ or 89.99€.