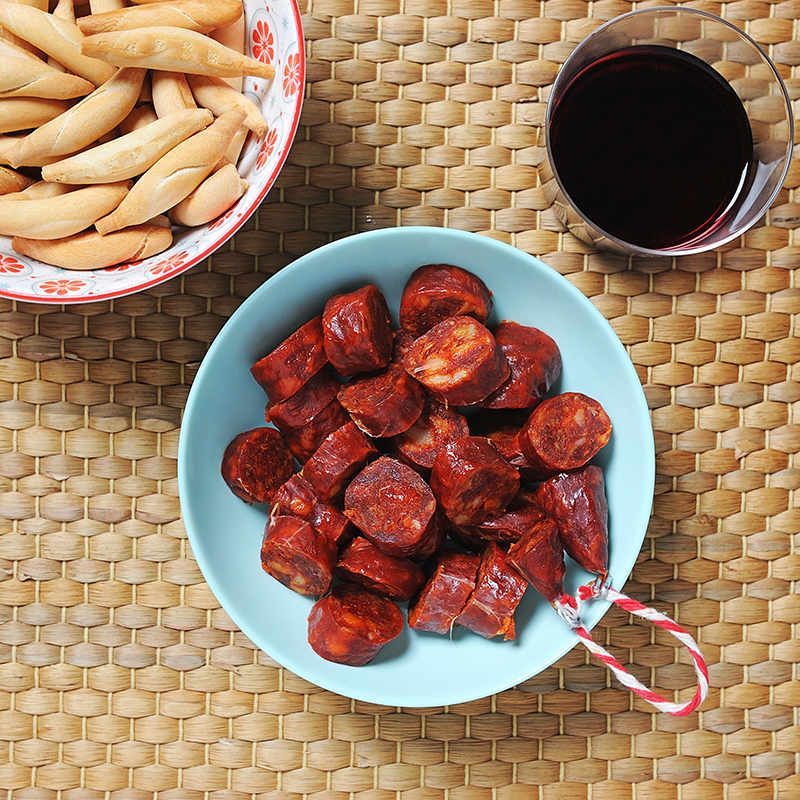 What is Revilla Chorizo?

Revilla Chorizo is a sweet Spanish chorizo with its own name. A white pork chorizo common in all Spanish homes and that is very difficult to find abroad. This homemade chorizo is ideal to eat as a sandwich or aperitif with a little cheese or Serrano ham.

The Revilla chorizo is very traditional in Spanish gastronomy and is part of the Spanish chorizos par excellence.

Characteristics of the traditional Revilla chorizo

Our Revilla chorizo comes in the form of a string. It is an extra sweet chorizo made without gluten, colorants or preservatives. It has a weight of 250 gr. approximate and should be stored in a cool, dry place.

What does it mean that it is a chorizo sarta? It means that the Revilla chorizo that you have at Gastronomic Spain is in one piece, with a caliber between 34 and 40 cm. and is shaped like a horseshoe. Perfect for dicing!

It should be noted that the Revilla chorizo is part of the Campofrío family, a leading Spanish food company in meat products, as well as one of the five largest companies in the world in the sector.

Revilla Chorizo and its ingredients

Without a doubt, the Revilla chorizo ​​is a good complement to accompany your favorite recipes. Could you tell us in which dishes to combine it? In Gastronomic Spain we give you some ideas:

Lentils with chorizo ​​is one of the most popular recipes in Spain. Its main ingredient is lentils, usually of the pardin variety. This product is usually cooked slowly along with other elements such as blood sausage, bacon and, of course, chorizo.

Rioja style potatoes is a typical dish of La Rioja, although it has spread throughout Spain. It is made with just three ingredients: potato, chorizo ​​and paprika. An easy dish to prepare and very rich.

Another of the star combinations of Spanish gastronomy. A traditional and homemade dish that is made with chickpeas, potatoes, chorizo, onions and garlic cloves. The combination of flavors ofchorizo and chickpeas stew ​​is transformed into a well-seasoned dish to delight anyone.

It is evident that if you live outside of Spain it is very difficult to buy Revilla chorizo in a supermarket. But with the help of Gastronomic Spain everything is possible.

In addition to the Revilla chorizo, you can also have a wide variety of quality Spanish sausages: salchichón, sobrasada, fuet, bacon, blood sausage and much more.

It's time to eat like in Spain, even more so if we take into account that we send you Revilla chorizo for free anywhere in Europe. Check the conditions.