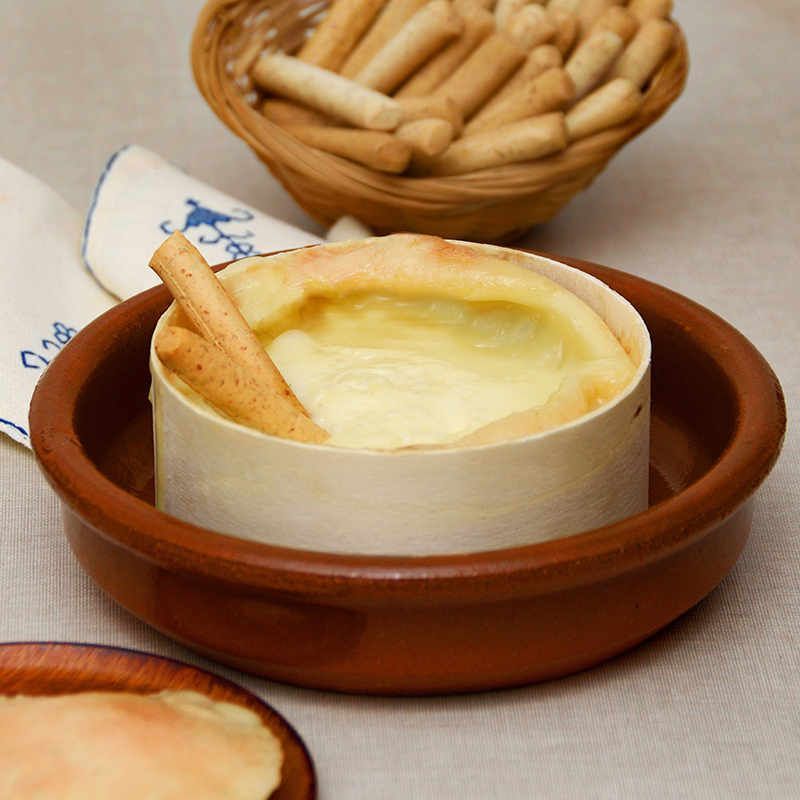 Torta del Casar 500 gr. It is a creamy cheese with Protected Designation of Origin that is made in the north of the Sierra de San Pedro, specifically in the province of Cáceres.

Torta del Casar is made from raw sheep's milk, vegetable rennet and salt. It has an intense flavor but very delicious on the palate.

It is a type of cheese that is consumed in a special way. Normally the upper crust is sliced (it will serve as a lid later) and the cream inside it is spread with bread.

Check all the types of cheeses available at Gastronomic Spain.

Our Torta del Casar of 500 gr. (approximate) is made from raw sheep's milk, vegetable rennet and salt. It has dairy and vegetable aromas, but above all it has an intense and very rich flavor on the palate.

It has a cylindrical shape, with substantially flat faces and round edges. It is composed of a semi-hard, yellowish, soft and unctuous crust.

The texture is the differential point of the rest of Spanish cheeses. Torta del Casar is creamy and fatty in character.

La Torta del Casar of 500 gr. It is characterized by being a natural cheese made using traditional methods based on raw sheep's milk from controlled farms.

In addition, this delicious creamy cheese known as Torta del Casar is from the Protected Designation of Origin in Spain. A taste of the Spanish gastronomic culture itself.

This Protected Designation of Origin is European in scope and is regulated by the Regulation (EC) of the European Commission. This means that Torta del Casar complies with the requirements stipulated by legislation, in addition to having top quality material.

Preparation of the Torta del Casar 500 gr. by Pastoralia

Pastoralia's Torta del Casar is made with the best between-fine sheep's milk and fed in a traditional way. This soft cheese following all the necessary guidelines to achieve a perfect Torta del Casar:

Pastoralia is the manufacturer of our Tortas del Casar. It is the brand that makes up this Spanish cheese with Denomination of Origin and is part of Pastovelia, the main producers of Extremadura sheep and goat cheeses.

Thanks to Pastoralia and Gastronomic Spain you will be able to savor the best Torta del Casar with Protected Designation of Origin from anywhere in Europe.

Enjoy our entire catalog of exclusively Spanish products. The typical products that you cannot find in the supermarkets of London, Paris, Amsterdam or Berlin. But they are available at Gastronomic Spain and with free shipping anywhere in Europe.