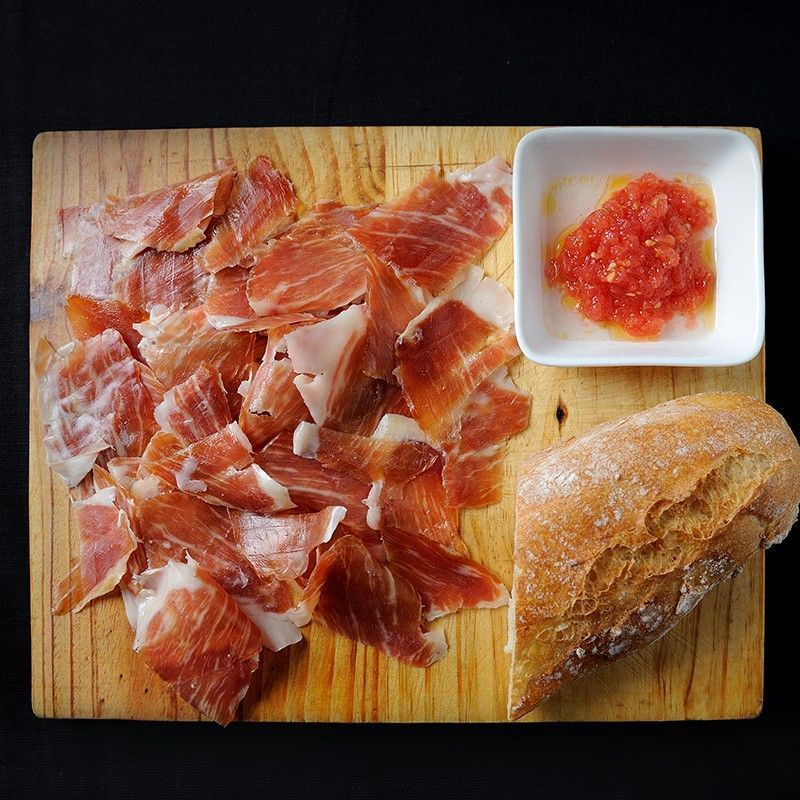 Teruel exists and it has an excellent ham.

Our Serrano ham is from Teruel and air dries at least 18 months. Both flavour and taste make this ham a real pleasure. Sliced by hand is the best way to enjoy this great product.

Coming from one of the most valued designations of origin, our Teruel Ham has a minimum cure of 18 months. When cutting it presents its typical reddish color with the characteristic white streaks. The careful elaboration gives it its soft and slightly salty aroma.

Our Ham from D.O. Teruel is cut with a knife, which is how ham tastes best. Enjoy this delicacy in the 1,000 possible ways, dry stick, with tomato, as you like.

Serrano ham is a typical food of Spain and one of the most popular and international dishes. Ideally, eat it when you cut it with a knife, but we can eat it vacuum packed and even cooked and fried. As for example: broken eggs with ham, melon with ham or Teruel delights.

This ham is very versatile. As a recommendation, I would ask you to store it in the fridge and open it 15 minutes before eating. Teruel ham is an excellent product, possibly the best serrano ham in Spain. Although it cannot be compared with the Iberian ham, the quality price ratio is unbeatable, This makes it a good option to taste at Christmas or give to a family member or friend.

As a suggestion, I recommend the delights of Teruel, a typical Spanish dish very easy to prepare. It consists of a toast on which you put a little oil with garlic, grated tomato and thin slices of Teruel ham. It is eaten at room temperature. A snack that everyone likes and that goes well at any time of the day.

The expiration of the product is very wide, at least 9 months, provided it is kept in the refrigerator. Avoid putting any other product on the envelope of ham, to avoid losing the vacuum and thus spoil its contents.

This serrano ham has twice won the award for best Serrano ham from Teruel. Unlike most mountain hams, it has had a process of drying and healing by hand, salted and dried by hand and with a minimum cure of 21 months for hams of 8 kg, reaching over 24 months of healing in many of the hams It is a fatty, juicy ham with a delicate flavor. Its type of feeding and raising causes that in many cases it has the fat infiltrated in the meat. Enjoy it with bread, oil and a good glass of wine.

RECIPE OF BROKEN EGGS WITH HAM D.O. TERUEL A KNIFE

ELABORATION:
A popular recipe that if you are Spanish you have eaten countless times. This time we are going to cook it with serrano ham D.O. from Teruel. A delicious white pork serrano ham, which is considered the best white pork ham.

The first thing we are going to do is peel the potatoes and cut them into small pieces of about 2 centimeters on the side. Then we will wash the potatoes to remove the starch. (This is a very useful trick, since it will facilitate its frying preventing them from sticking and leaving the potato loose when we take it out of the pan).

Once the potatoes are washed, we dry them well with a cloth cloth. They have to be perfectly dry, since otherwise the oil will jump when we put them in the pan and we could burn.

We put the pan with a little virgin olive oil. One finger does not have to cover the potatoes, since we will slowly fry them. We also add the garlic crushed with the skin and one or two cayenne chillies (depending if you want it more or less spicy). Having cut the potatoes thickly, we have to fry them slowly, since otherwise they would be raw inside. This process will take around 30 minutes.

When the potatoes are practically cooked and fried, we will remove all the virgin olive oil from the pan. We put the serrano ham that we have cut in the pan. We set the heat to a minimum and let the ham release the fat and integrate with the potatoes.

It's time to fry the eggs, even if it seems the easiest task; It is not.
It is very important to fry the egg and keep the yolk liquid.

We finish the dish, putting the potatoes with ham and the eggs on top. Break the eggs and mix the liquid yolk with the potatoes and the serrano ham.

TIPS:
. Be careful with salt. Do not add salt until the dish is finished. Serrano ham is a salty food, when fried with potatoes it will release a lot of salt.
. Frying eggs is not easy. This tip can be very useful. Use a small skillet but make it high. Put enough oil but that is one or two fingers from the edge. When you open the egg do not put it directly in the pan, put it in another bowl and add the egg when the virgin olive oil is hot. We tilt the pan so that there is more olive oil on one side than on the other. We add the egg on the side that there is more oil so that the egg is completely covered. With a fork we mold the egg in such a way that it is in the form of a sphere, where the egg is fried on the outside and the yolk completely liquid.
. Eat with bread If it is from town much better.